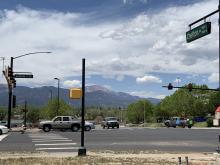 The City of Colorado Springs is proposing improvements to transportation and neighborhood vitality along portions of Chelton Road, Jet Wing Drive and Hancock Expressway.  These roads have been identified in the City Bike Master PlanA plan for the development of a portion of the city that contains proposed land uses, a generalized transportation system, and the relationship of the area included in the plan to surrounding property. as key bicycle corridors, and the City has studied how bicycle infrastructure might be added to provide bicycle connections and improve safety by providing dedicated space for people on foot, on bikes and in cars.

How this would happen

3-lane roadways such as this project proposes generally result in slower speeds and crashes that are less severe, resulting in a more neighborly feel. 3-lane roads are easier to cross and act as less of a barrier in our neighborhoods than 5-lane roads.

By creating dedicated space for pedestrians, people on bikes and people in cars, the entire corridor will provide a safer and more predictable trip regardless of how you choose to get around. The added buffer between vehicles and bikes provides an additional margin for error for all roadway users.

The proposed bike lanes would provide much needed connections for people on bikes to:

Between 2016 and 2018 the City completed a citywide Bike Master Plan, which involved extensive public engagement. One element of the plan was a vision network of existing and future bicycle infrastructure. When built out, this network would provide basic connectivity across the city. The Master Plan identified locations for infrastructure but did not specify what that infrastructure would look like or when it would be built. The segments under question were all identified in that future network.

Chelton was repaved in 2019. At that time, citizens approached the City requesting that we consider a roadway safety reconfiguration to include bike lanes, citing the following benefits:

Although the benefits were clear, the City felt that a decision to reconfigure Chelton would require an analysis of the potential costs of doing so. In late 2019, the City contracted with WSP, a local engineering consulting firm, to conduct data collection and analysis for Chelton, Jet Wing, and Hancock.

The collection and analysis were finished in spring, 2020, and the City is ready to share with residents the results.