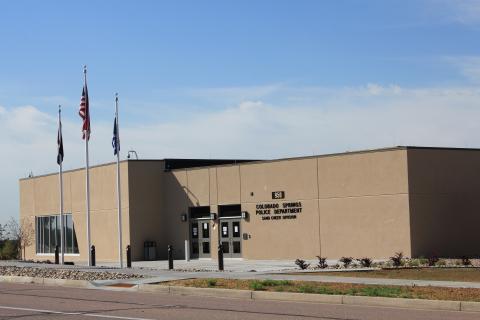 In the event of an emergency, this substation has a call box buzzer at the front door, which will alert staff inside the building. Citizens who need to initiate a report in person with CSPD between the hours of 9 P.M. and 7 A.M., should go to either the Stetson Hills Substation or the Police Operations Center.

In May 2016, the Colorado Springs Police Department started the process of building a new Sand Creek Substation.  The old building, which opened in 1989, was no longer large enough to accommodate the additional personnel and officers that serve the southeast portion of Colorado Springs.

Jerry Grage, a local businessman, sold 8.69 acres of land to the City at below market value and then donated another 1.88 acres for the project.  In August 2016, a local architect firm, the DLR Group, was selected to design the building and in October 2017, the local GH Phipps construction company was selected to build the building. Twenty-one months later, on June 17, 2019, a ribbon cutting ceremony celebrated the opening of the new building.

The new Sand Creek Police Substation’s unique design is over two times the size of the old building, which allows for expansion of services for the next 30 years.  With state-of-the-art construction and amenities, it will service citizens and employees alike for many years to come.  The community room is large enough to be split in two separate areas, accommodating two community groups at once.  In addition, the public parking is more than twice the size as it was at the old building.  The Colorado Springs Police Department wants the substation to become a gathering place for the community.