These untitled sculptures, created by William Barriss Martin, hang in the concourse between gates 1 and 2. They were acquired in 1994 and installed prior to the opening of the new facility. Martin was born in Cleveland, Ohio in 1923. During WW II, he served in the Pacific. Prior to the war, he received two years of training in chemical engineering at the Case Institute of Technology in Cleveland, then went on to earn an industrial engineering degree from Ohio State. Martin also studied painting and sculpture at Boston Museum School. Some of his major works can be seen in Dallas, Ottawa and Toronto. In addition, he has exhibited at the Library of Congress and the Cleveland Museum of Fine Arts.

Artist's Statement: My work has evolved from sculpture integrating combinations of materials in static relationships to work that responds to the light and air movement in its environment. Current works are returning to my earlier interest in painting in three dimensions, creating kinetic painted sculpture. 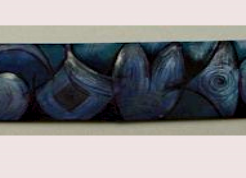 Artist's Statement: For a number of years, I worked as a scenic artist; painting sets for theatrical productions. Although I felt lucky to be working as an artist, my life was spent carrying out the artistic inspirations of the designers. I was the process, they were the product. Even though I no longer paint scenery, those experiences led me to my recent attempts to reconcile the connection between process and product in my current work. I gave up latex paint and muslin in favor of dyes and silk a number of years ago, and have never looked back. With these I can build up layers of transparent color and accentuate each step taken to reach the ultimate look that I desire. I layer colors, work with unusual materials, combine printmaking and painting techniques, and use untraditional painting tools like broom straw and garden sprayers. The experience of each piece shouldn't stop with the imagery. Instead the imagery and the process form an inseparable link. With each piece, whether it be a scarf, a garment or just a piece of yardage, I want how the piece was created to be just as intriguing as the aesthetic of it. I am no longer merely the person who carries out the design, like in my old scenic painting days. I am now inspiration and artist, designer and technician. There is no separation. 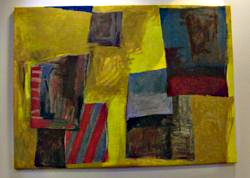 On display on the south wall by Gate 2, the Mary Chenoweth estate donated this painting in January 2000.

Chenoweth was born in Tulsa, Oklahoma and developed a childhood interest in art, encouraged by an uncle who worked as a commercial artist. She began her professional art training at the Chicago Art Institute and then went on to the Pratt Institute in New York. She moved to Colorado in 1949 and completed her Bachelors Degree in Fine Arts at Denver University in 1950. She received her Master of Fine Arts from the University of Illinois, one of only a small group of women with an advanced art degree in the entire country in the early 1950s. Chenoweth taught art at the now-closed Colorado Springs Fine Arts Center School and then became a professor at Colorado College.

She had many artistic influences, most obviously Picasso and Matisse, but Chenoweth was also inspired by her extensive travels by sea to exotic climes, especially North Africa and Asia. Though Chenoweth worked in a variety of styles, she was always an abstractionist, even when addressing recognizable images. She is best known for her woodblock prints, but also created fine paintings, remarkable collages, exquisitely door carved reliefs and painted sculptures. Chenoweth passed away on January 14, 1999. 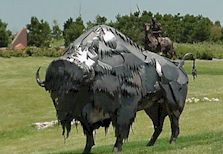 Purchased in 2000, these two steel sculptures, created by Don and Charles Green, welcome visitors near the airport's entrance: a bison and an Indian on horseback. These are beautiful works, striking both from a distance and close up, whether arriving or leaving the airport. The Indian makes an especially haunting impression on the way out, silhouetted against the sky and the open plains to the south.

Artist's Statement: The two larger than life sculptures located at the entrance to the Colorado Springs Airport were made by Don and Charles Green of Colorado Springs in 1980 and 1981. The sculpture titled "Blota Hunka", meaning warrior of the Plains, was named and blessed by Chief Talltree, a member of the Sioux Nation. Both sculptures are constructed of plate steel welded to an armature of steel rod and have been allowed to rust to achieve a natural patina that blends beautifully with their site at the airport entrance.

Located in the concourse north of Gate 3, this colorful quilt was created by Nell Smith and donated to the airport by Mike L. Edmonds, past chairman of the Airport Advisory Commission in December 2000.