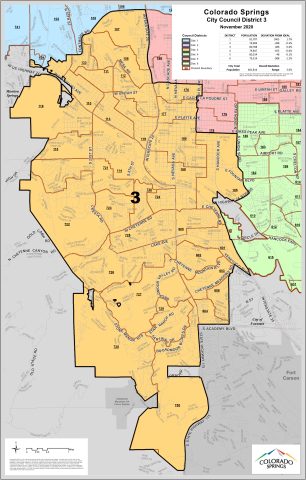 On Monday, January 10th, the Colorado Springs City Council met to consider the appointment of Stephannie Fortune to fill the vacant District 3 City Council seat. The motion to appoint Mrs. Fortune failed on a 4-4 vote. The appointment requires the affirmative vote of a majority of Councilmembers.

The City Council will hold an additional Special Meeting on Friday, January 14, 2022, at 1:00pm to discuss and vote to fill the unexpired term for the City Council District3 Vacancy. City Council intends to consider applicants from the previous applicant finalists.

The appointee will serve the unexpired term through the next municipal election in April 2023. Following this fifteen-month appointment, a two-year term for District 3 will appear on the April 2023 Municipal Election ballot. At this time, the appointed Councilmember would be able to run for re-election. Beginning in April 2025, the District 3 seat will resume on the standard four-year election cycle.

If anyone from the public would like to comment during this special meeting we encourage them to do so by emailing AllCouncil@coloradosprings.gov for more information before the meeting.